Home > Before You Go 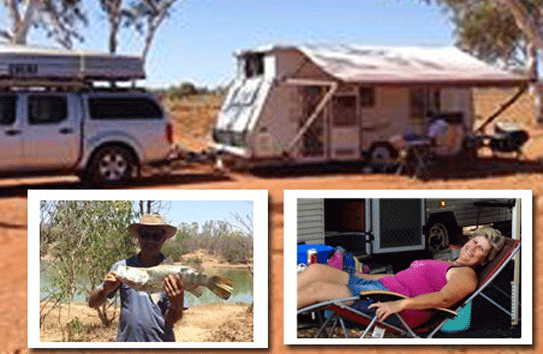 Conventional wisdom has it that grey nomads head north for the winter and then south in summer to continue their adventures in cooler climes … but do they?

It seems that increasing numbers of trend-bucking travellers are heading in the ‘wrong direction’ in search of relative solitude and serious adventure. The promise of staying at uncrowded campsites, seeing spectacular storms, and enjoy¬ing super lush greenery are persuading many to swim against the seasonal tide … but extreme heat, stifling humidity and challenging driving conditions mean it’s not for everybody.

As the grey nomad lifestyle continues to explode in popularity, it can come as a shock to many at how crowded popular hotspots are in peak season … but things change quickly.

In Broome and elsewhere in the north, van parks that are jam-packed one week can be near deserted the next.
Allen and Kathy Hunter, 63 and 61, are among those who have lingered longer and reaped the rewards.

“We were travelling north when everyone else was travelling south to go back home, which meant the traffic was lighter and the parks empty,” said Kathy. “We were a bit fearful about going the ‘wrong way’ but, after a while, we found our fears – heat, tropical storms, flooding, fire, cyclones – were unfounded … it’s easy to keep watch on all of these things and move out of their path.”

The couple says that after weeks of 40-degree plus temperatures, they have become acclimatised to extreme heat. Nonetheless, as they currently ‘sweat it out’ in Katherine, they confess their air-conditioned van has been a lifesaver … and they’ve kept their bushwalking urges to a minimum (although Allen still manages to fish!).

“We head for the swimming pool at the first opportunity,” said Kathy. “And most of our sightseeing ends up being via our vehicle … our trip isn’t necessarily to ‘do’ all the tourist things, we just want to travel and see our country as we go.”

“We have definitely been surprised how few other ‘out of season’ travellers are out and about,” said Kathy. “We might see one other van all day.”
So, would they travel north at this time of the year again?

And what about saving on ferry fares by heading to the Apple Isle off-season?

“Tasmania is absolutely gorgeous and I would definitely travel in the depths of winter,” said Kathy. “However, my darling heat-loving husband definitely would not!”