Home > Before You Go

When should you stop ‘delaying’ and hit the road? Across Australia, there are always tens of thousands of wannabe grey nomads straining at the leash to hit the open road, but many always find there is one thing or another holding them back.

While they are constantly warned to ‘do it while you can’ and ‘don’t wait until it’s too late’, some would-be travellers find themselves perpetually stalled by a financial hiccup, or by a delay with the van being ready, or perhaps by the upcoming wedding anniversary celebrations of close friends.

While there are all manner of reasons for a Big Lap to stall, it is family that is the most common ‘stumbling block’.

Often this might be a case of ‘we just want to see our youngest settled,’ or ‘my daughter needs help with the kids so she can go back to work’. However, an increasing number of retirees are now running into an issue at the other end of the generation spectrum.

While today’s retirees may be fitter than ever and be living longer than ever, in many cases, so too are their parents!

This can put people who have long dreamed of taking the Big Lap in a terrible quandary. On the one hand, they are keenly aware that their own health could decline and basically they are ready to go.

On the other hand, they don’t want to leave an ageing parent behind and worry they would always regret going if ‘something were to happen’.

Annette Ferner’s mum is 90 and is in good health for her age, so she still feels able to take off in the van … although not without some trepidation.

“But no matter where we might be in this country, I can get a flight from somewhere and be back in a day or so and mum has a network of contacts too so she’s never truly ‘alone’,” said Annette. “I know it sounds cruel, but mum (and dad when he was alive) had many years of travel so now it’s our turn.”

Annette’s determination to keep travelling is also fuelled by the fact that her husband John has health issues of his own.

“We want to get as many kilometres under the tyres and enjoy new experiences as we can whilst we are still able,” she said.

Greg Handyman has already delayed his travels once because of his wife’s mother’s illness, but he fears his own bad heart means he shouldn’t risk waiting too much longer.

“My wife’s mother is now in a comfortable nursing home with everything looked after and there are the other children of hers who visit and we, too, would visit when back near it,” he said. “But I’d like to do it before I am dead … because it is damned hard to do it afterwards.” 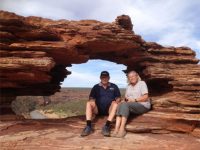 ‘It’s been incredible, but no more big trips for us now!’ 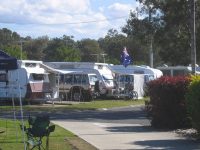